Lost Worlds is a documentary television series by The History Channel that explores a variety of "lost" locations from ancient to modern times. These "great feats of engineering, technology, and culture" are revealed through the use of archaeological evidence, interviews with relevant experts while examining the sites, and CGI reproductions. These visual re-creations take the form of rendered 3D environments and photo manipulated overlays, allowing the "lost world" to be seen over its present-day state. The pilot episode "Palenque: Metropolis of the Maya" was first aired on April 4, 2005. It was followed by 12 more episodes in 2006, and a further 19 episodes in 2007. 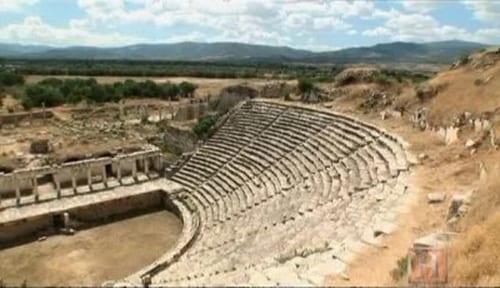 Aphrodisias is a magnificent city of marble dedicated to the Greek goddess Aphrodite. It is widely recognized as one of the best-preserved sites in the Classical World. Although forgotten until the mid-20th century, the city's remarkable state of preservation led to comparisons with Pompeii.